From Beet to Beat

Before I get started, I wanted to explain how I got to making 60 Vegan Burgers for an Event called : "Back to the Funk". Feel free to skip the intro and get straight to the recipe.

A few weeks ago I was booked as a cook for Breakdance camp called I'm Possible to cook Vegan food for kids between 6 and 12 for a week. It was quite the experience and I really enjoy hanging out with these untainted spirits, as I still feel like one myself. Some of these kids completely transformed in one week from not liking olives to loving them. Other kids never daring to cook by themselves, started developing an affinity to cooking and exhibited traits that became anecdotes revealing that will master independence at a very early age.

How did I get to this?

I grew up around the local Hip Hop scene in Zurich, but started diggin in the crates for vinyl since 1992. Having lived in the US, gave me a little bit of an edge on the elaborated kind of poetry and funk as opposed to the standard gullible pop Gangster non sense. Always appreciated a good example to youth, working with youth centers doing graffiti projects, encouraging camaraderie, community work and making sure to convey strong moral codes of conduct, whilst promoting one of the most important and undervalued subcultures of our time.

Although I grew up on Graffiti and Emceeing, I was never too far from the breaking scene. Specially hanging out with some awesome B-Girls who shaped who I am much more than most dudes dancing. That's because I really liked when someone could just embody themselves as a person and feel free. I noticed that it's time for women to shine and I guess growing up around a patriarchic society in a country where women only received voting rights in 1971, that really made me a feminist. That freedom in dancing being yourself, liberated and free resonates positively with others and really encourages people to get up, let loose and live. One of my favorite female breakers(Bgirl) @kunoichi, happened to become a really good friend and still is to date. She thinks of me when it comes to various gigs. We all used to live a really interesting life, busking, always out doing street shows, where i'd mostly rap and host cyphers. At one point as some of you remember from my last post, I went on my journey to Mumbai, where I became witness to some of the first Breaking battles that ever took place in India. Yeahh, I also happened to help organise the first time that the only breaking crew in Mumbai battled the only other. They initially had a few crew members break off the original only group that trained alongside two american - Indians and formed a new Crew. The crews were called UDK and Freak and Styles.

Event in Delhi celebrating the 40 Year Hip Hop Anniversary.Where I played some classics on vinyl and also Hosted. I wanted to create an event with one of India's first Hip Hop DJ, who had been around while I was on vacations in India as a teenager in the 90s promoting Hip Hop Hurray as a movement back then

Later I got to be a part of cultural exchange programs such as the Indo-German Hip Hop and Urban Art Project sponsored by the German ministry of Foreign Affairs, the German ministry of commerce and other projects like the Indo-German Hip Hop Movement that funded the travels for Indian artists to Europe steadily giving a positive message about hip hop culture. I also ran a Guesthouse in South Delhi, that had a basement, where random dance crews showed up while i'd Deejay and the energy was mad. I made sure that these dancers knew I was all about Ahimsa and Śākāhāra when id came to the food I was making there. While I was gone, some of the people I used to hang out with became teachers at Dance Schools, DJ's or organisers for really awesome events and Camps Sports. When In returned from India a lot changed. I never really got back into the scene the same way. A lot of the cats that were active when I returned were all around 10 years or more younger than me. An older guy, who happened to be connected to the originators of Hip Hop in the Bronx New York was known to me, so I got in touch, as we were from the same brotherhood/Fraternity that created the Hip Hop Culture in 1974. Being a member heading the first India chapter in 2006 alongside a few others I tried to touch base and connect once I returned.

Many years pass and once in a blue moon I get an opportunity to support a great event.

There are some events you'd just support because it's for a positive and uplifting cause. 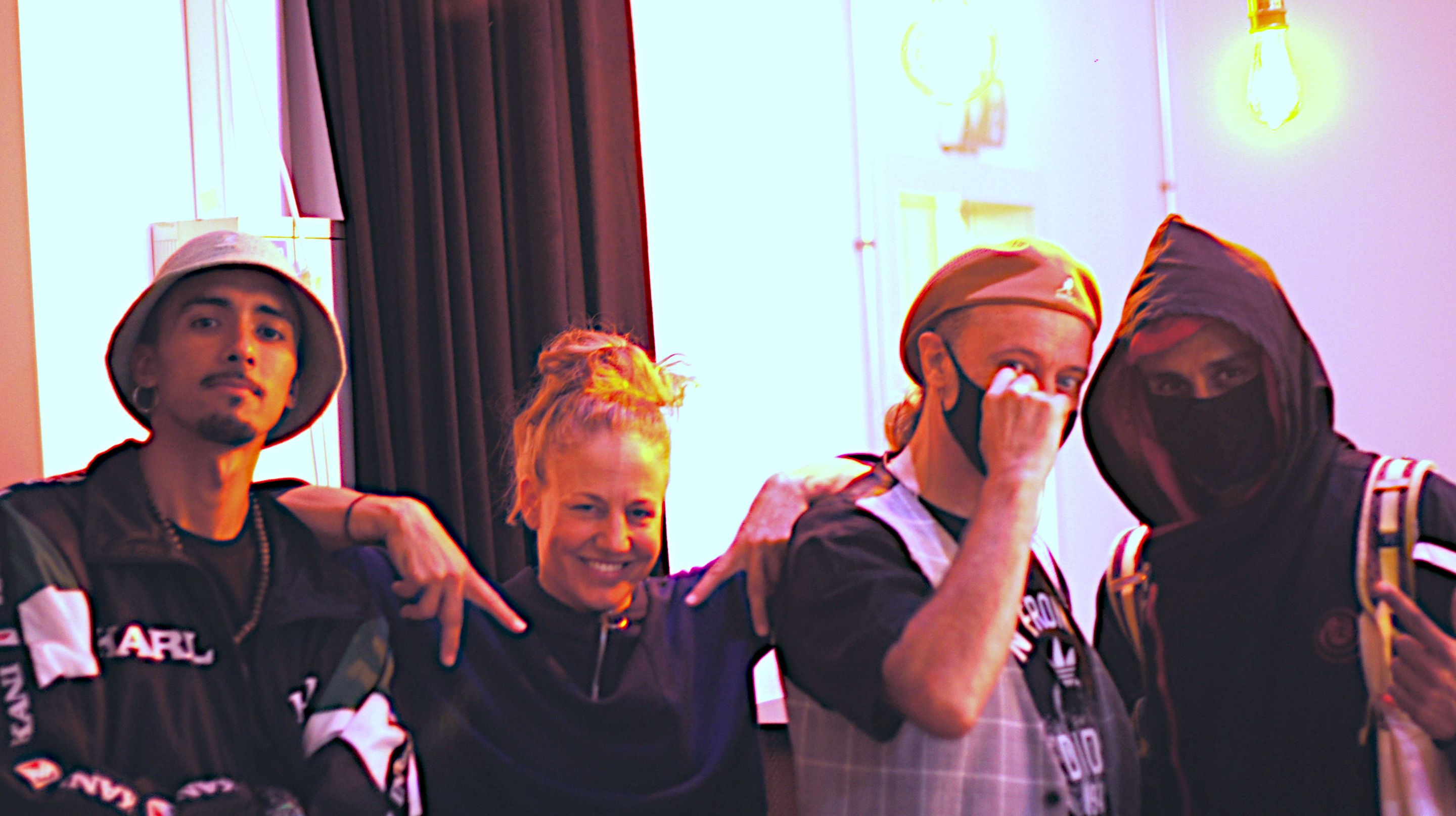 So I was invited to host at an Event called : "The Funk is Back"
I was also honoured to give a little concert with some of the older music I created, being able to bless the stage with some vocals one some home made instrumentals. I also supplied some organic cotton Bags manufactured with 100% renewable energy in India and transported using consolidated containers via nordic ports by rail to Basel, Switzerland. Provided to the organisers for very inexpensive at cost, they got them printed locally with this really cool design.

The theme of the event was exceptional. A live band, Dai Kimoto and the Swing Kids would have an instrument player do a solo whenever one of the dancers would start to battle. The theme was NO Plastic, which meant that you'd get free coupons, which were contracts to live plastic free for a day or PET free for one week. The event was sponsored by the Turgauer Kantonal Bank, Kultursee, Stiftung Jugendförderung(Trust for youth empowerment) and the city of Kreuzlingen. Obviously the Food had to be Vegan and they asked, you know who, to make 60 Vegan Burger patties.

For this recipe I used a special product called "Sonnenblumen Hack", which is basically dry minced Sunflower Protein. I started by Soaking the Chic Peas and Black Beans over night.

Cut Shiitake and fry in some olive oil and add sliced onions. Then add some smoked paprika and some bouillon.

Put sunflower or soy Protein in frying pan, add olive oil and bouillon. Then add smoked paprika and douse with some red wine. Use enough wine and make sure to give it a good stir. 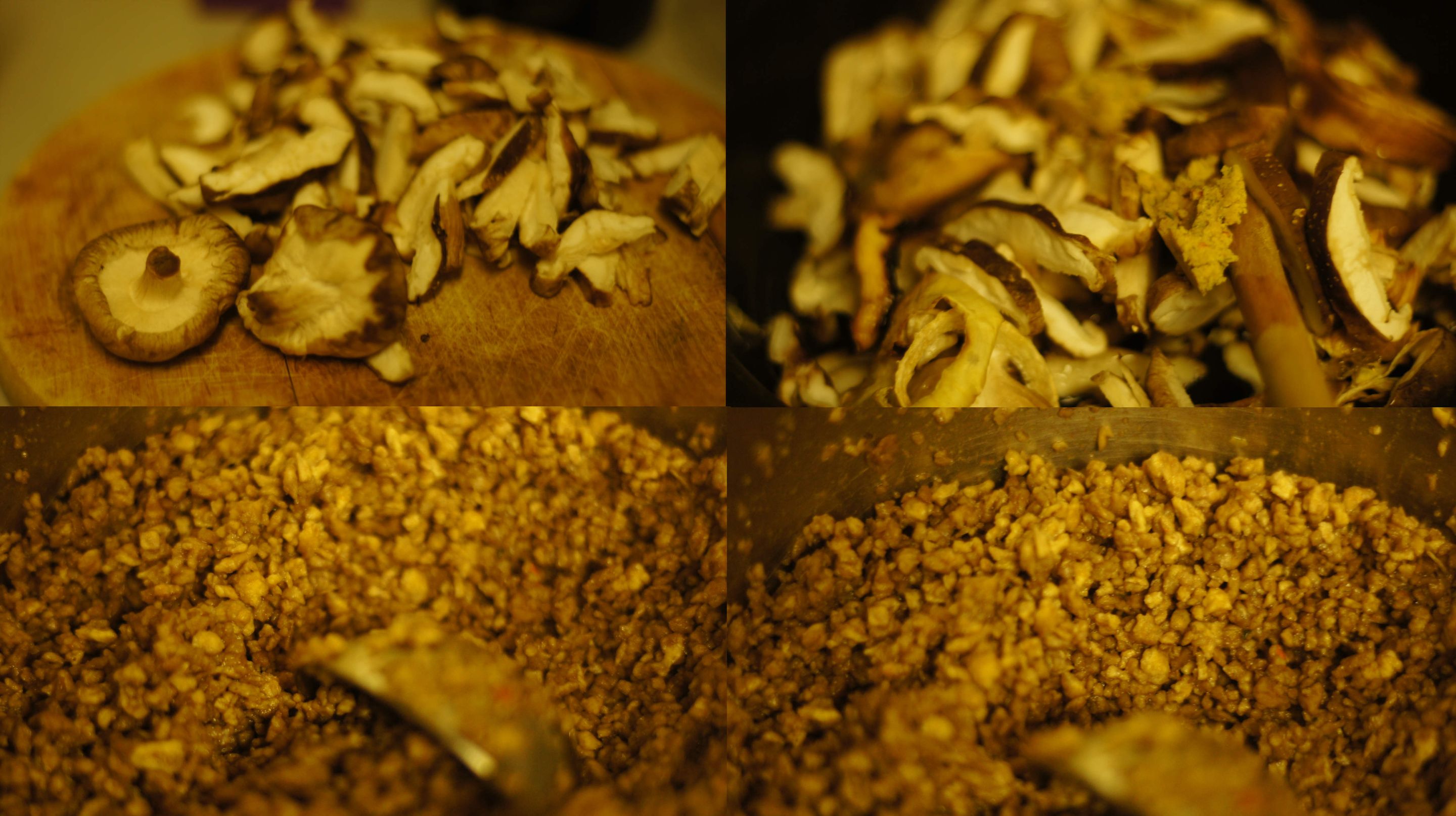 Mix chic peas, smoked paprika, shiitake, beetroot, oregano and a bit of Bouillon with a good mixer. (I Use a Vitamix) Do the same with black beans. Make sure the mass feels like a dough that seems thick enough to bind. Imagine you're gonna make falafel or something solid with it. 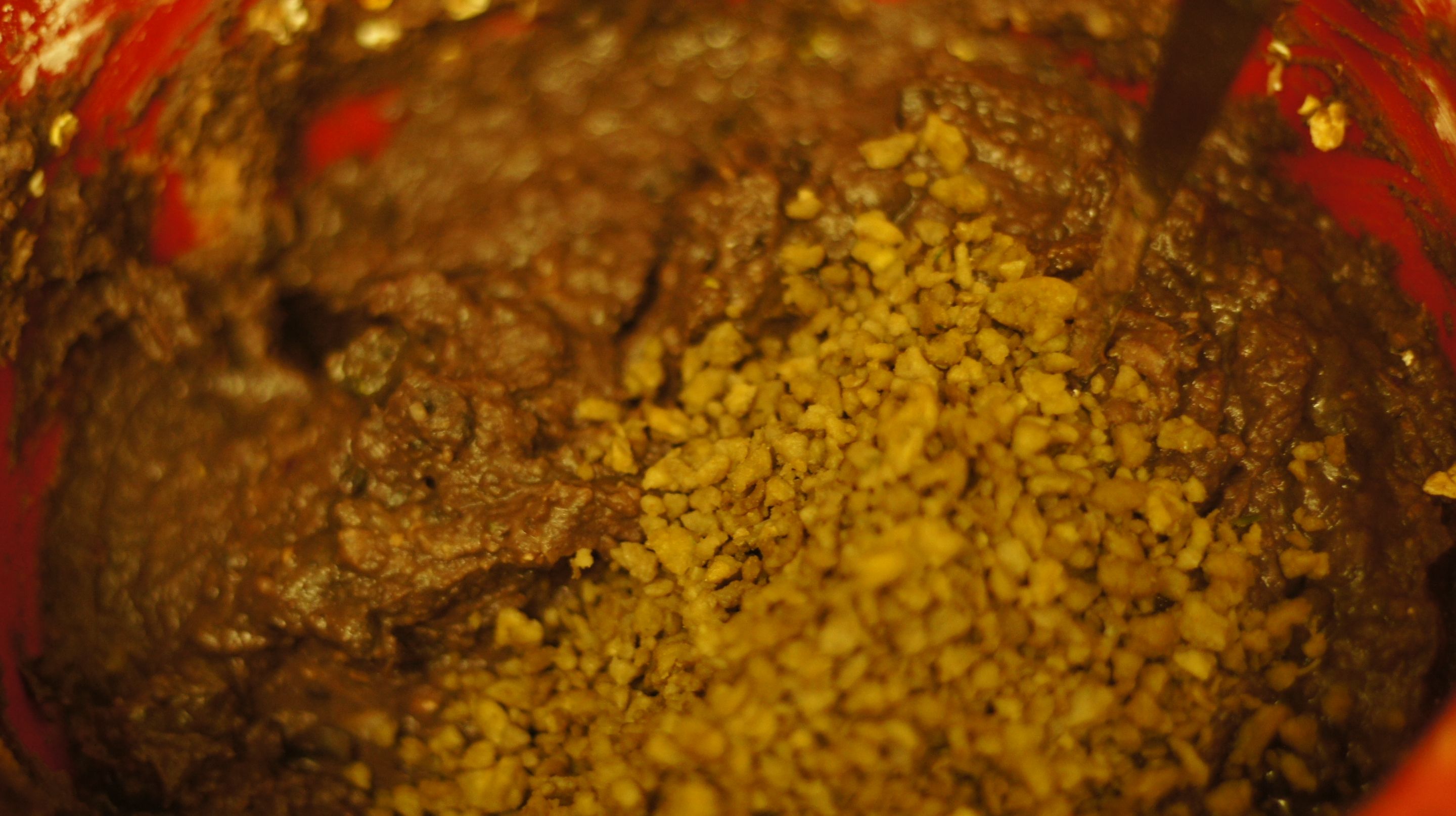 Take a separate bowl and add some oats. Bind the Burgers and dip them into the oats using your hand to shape them into nice looking burger patties.

Place these into the oven for a while. I used around 220°C and baked them for 15 min. Now that I had all these burgers, I packed them in used Ice Cream boxes I kept. I knew would come in handy one day for packing stuff. So I then used them to make these Burgers transport ready. These Burgers were basically ready to put on a grill once at the venue. Everyone prepped their own buns, garnished them with some salad and tomatoes and were ready to beet the beans and chicedy-check them beets.

I know my post title seems violent and yet could be deceiving or to some misleading. I really hope I could provide some flavourful ideas for making delicious burgers. Nevertheless I really liked the word play. In German Chic Peas means Kichererbsen Kicher means giggling. I had a lot of fun with that while I was hosting at the event and mentioning that these giggle beets were available.

When I was living in India the gustatory and olfactory senses were as important as the kinaesthetic, vocal, visual, auditory and the power of mind and spirit. Plant based sustenance became a really important aspect for a healthy lifestyle when it comes to a highly demanding physical activity such as breakdancing. We all know how these feats of strength and power seem to defy what we thought we knew was possible. Every year there is some new record broken or someone invents a new kind of move in one of these subcultural disciplines. Over the years I have seen various artists change their eating habits, only to look lighter, move faster and become even more powerful. During that Camp with the kids and at the event we tried to convey the positive aspects of going vegan, give people ideas, show that they aren't missing out on anything and make sure we create awareness about nutrition, bioavailability in foods and simple ways to improve over all well being. With so many dogmas from the pharmaceutical industry created about various forms of deficits the propaganda of the meat industry is still very strong here. Certain claims about possible deficiencies are simply false and due to the lack of creativity in individuals accustomed to an almost meat only diet. As we enter an era of entirely new ways to understand how our colon is stimulated, digestion and synthesis occurs and which foods constitute to an optimal flora, we might want to rethink some common notions. As new theories are being devised from observational data and proof, we might want to lay down some of those traditional beliefs that murdering other beings is necessary for survival, whilst we actually have a choice not to and it actually might be healthier not to eat so acidic. The subject of Blood Group diets for those who believe in them and human gut microbiomes their phenotypes, neurological issues, shall be discussed and elaborated in further post.

Here are all my previous recipes, always vegan in case you feel like trying something else:

If you're interested in reading my longest rant about being vegan ever, you should also check out my post: Vegan Cuisine

'Empty your mind. It is easy to lead a herd of consumers hooked on material wealth. Without the wealth portrayed to them or being apart, they feel nothing inside. What is nothing? Wanting to live a life that isn't their own, chasing pipe dreams, their quench for thirst is never satisfied. Everything that gives them substance is outside of them, not realising the infinite wealth that comes from the void of emptiness within. The greater the void, the larger the space to fulfil ones own path towards enlightenment.' - @yangyanje 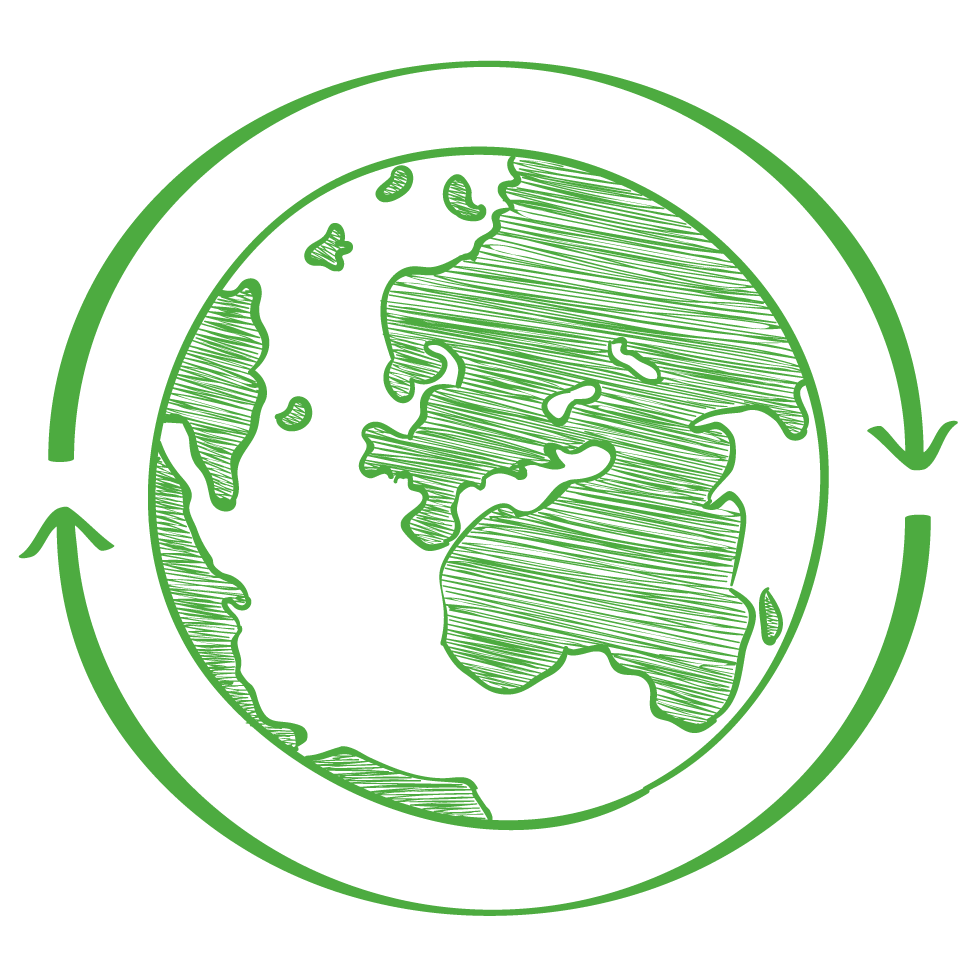