Whilst in India I decided to use 'RANE' as letters and as a name to describe this character that kept popping up in my head. A story of a batman type vigilante that actually got me more into batman and DC comics than ever before. Just because I wanted to make sure I set myself apart from what is already out there. I wanted to use 'RANE' as a legal name for painting commissioned or permitted graffiti. I tried to come up with concepts and ideas to describe something viewed as conventional and make people question it by intriguing with reality, thus provoking the mind. By creating a character being a rebellious voice that questions the construct or dogma of mass conditioning felt current to our paradigm. The first time I painted in India using spray paint, was as far back as 1999. In 2007 I had painted on the streets of new delhi with another illegal name. I used that illegal name in Mumbai, because I actually lived there before moving to Delhi in 2008. Honestly, I never saw anything in Mumbai except for 'bean bags' until 2011. OK, maybe a few french artists? Graffiti at the tiger translate event in 2008 at 'redlight' was really the first time I saw graffiti. Next to 'Apna Thacker', an artist who had painted at a gathering they called the 'wall project' by 'Dhanya Pilo', nothing in terms of graffiti was going on in mumbai at the time. The tools available was really cheap car paint, which was either very liquid or came out of these cans like spaghetti. Painting a straight line with those was a mission. In the beginning there was no one painting graffiti in Delhi. The walls in India weren't blank. There was art by board painters who hand painted walls using brushes commissioned by advertisers. A lot of coca cola commercials. Then all of a sudden, I saw names pop up like 'Zine' or 'Daku' apart from a few others. One could tell that the others weren't locals. Probably from USA or Europe. They spelled names like 'Bond' or 'Dezer'... I wasn't really local either. For anyone to really tag or grab a can and paint at that time was an anomaly. I actually heard about 'Zine' and found out about his true identity through an American girl who knew him. I told her I wanted to meet him. When I met him several months later, graffiti had slightly picked up, so we weren't the only ones painting the streets anymore. Whenever 'Zine' asked me who I was, I lifted my shoulders. I teased him quite a bit and never really admitted anything I did illegally in my night sessions to date. To me it was like Batman. You never reveal your true identity. Satoshi Nakamoto? That's another story....

I wanted to paint this masked character as a semi legal action figure. A person of stealth. Ninjas are also known as assassins, so I wanted something more peaceful, less violent, but still unpredictable and mysterious. A Shinobi was born...He lives by Ahimsa and Shakahara, so he is vegan, respects all living beings and tries to cause the least amount of harm. I had a friend in Delhi who reminded me of a Shaolin monk. He wore these beads and always conveyed this calm and deep sense of stillness. We often had endless conversation on my balcony about spirituality, history and non-violence. We spoke about 'ahimsa' as basic empathy for higher learning and the limits of ethics in the current age of consumerism. He told me a story that stuck with me. It was about an ancient university in India that taught astronomy, mathematics and also came up with number series and fractals as if they had computers to run them through during the Ashokan era. (prior to the 12th century AD) I imagined a fictional story derived from that portion of history in which 'Rane' would be a character of. Only a timeless one. I added some science fiction and thought of a way to bring asian culture and it's non-separatist philosophical approaches closer to people. I wanted Rane to tell the story of a person and a journey that all asians can also relate to. Strongly inspired by buddhist philosophies but also modern scientific perspectives of quantum physics, isotopes and superconductors. Since I was born in Switzerland with asian roots, I guess my perspectives with a Tri-Cultural approach might bring current topics closer to peoples hearts. How about some kung fu, yoga, telekinesis, clairvoyance, precognition etc..?

I began writing down that story about 'Rane'. I made a few canvases, of which I shared a few in this blog. There were several characters and one of them 'Soan' or later 'yanyangje' who was born on the Steemit blockchain. Apart from the story, I use Rane as artist name for my paintings. I use 'Soan' for writing, lyrics and music. I have a recording studio using Roland groove boxes, Yamaha sound generators, Akai and Korg modules and mostly synths from the 90s. 'Rane' is red or red and black, which is because he is humble and always on a never ending path to learn and to attain knowledge. Knowledge doesn't exist for 'Rane', it is a form of attention to him. 'Soan' is yellow. 'Soan' is the ascended being who basically exists as a spirit in my story. He appears to 'Rane'? during flashes of light and is a spiritual guide. He once possessed a physical body but then chose higher realms of existence. There is one Shinobi called 'mode' who is orange and who is kind of like a shapeshifter with military strategies like OODA. He doesn't stop and absorbs everything. His hunger never dies. I always wanted to publish this story and I am still writing it. This story is a process and in many ways also includes my discovery of Steemit and the type of libertarian thinking which brought me here.

The Blockchain and crypto space has profound philosophical implications for me. I disagree with the current financial and political paradigm and quite frankly believe that many can't imagine an alternative when faced what is sold to them as reality everyday. People on Steemit have hope and know that this can finally change after marxism, socialism and Keynesianism! I never got into crypto for money. I share idealistic views with people here that care about the environment, resources and I am here because of value and high morale. We can spend money and get it back, but once we spend time, it's gone. We can choose to share it with whose ethics we can agree with, that appeals to our senses and share. We can create... The reason why I am here right now and why you are still reading this is because it's meant for you. I realised that many of you truly make me smile every day when I read your posts. I have never witnessed such engaging people and so much dedication to social media that benefits the common good of our Steemit community. Steemit is a powerful and consistently growing community and I can see it's future having a huge impact in our world.

Apart from documenting and sharing content, Steemians are committed to drive the community forward and create value. That in itself is so powerful. With content creators, curators, pioneers, musicians, vloggers, fundraisers and so many platforms on one blockchain the power of Steemit is greatly underestimated by many who are still using mainstream social media. Many still hold on to conventional social media platforms. More people will become Steemians. Facebook, Instagram, Sears or Walmart. "What has a beginning, has an end"-Mr Smith, - "You were always right, It's inevitable"-NEO. (From the movie "The Matrix") 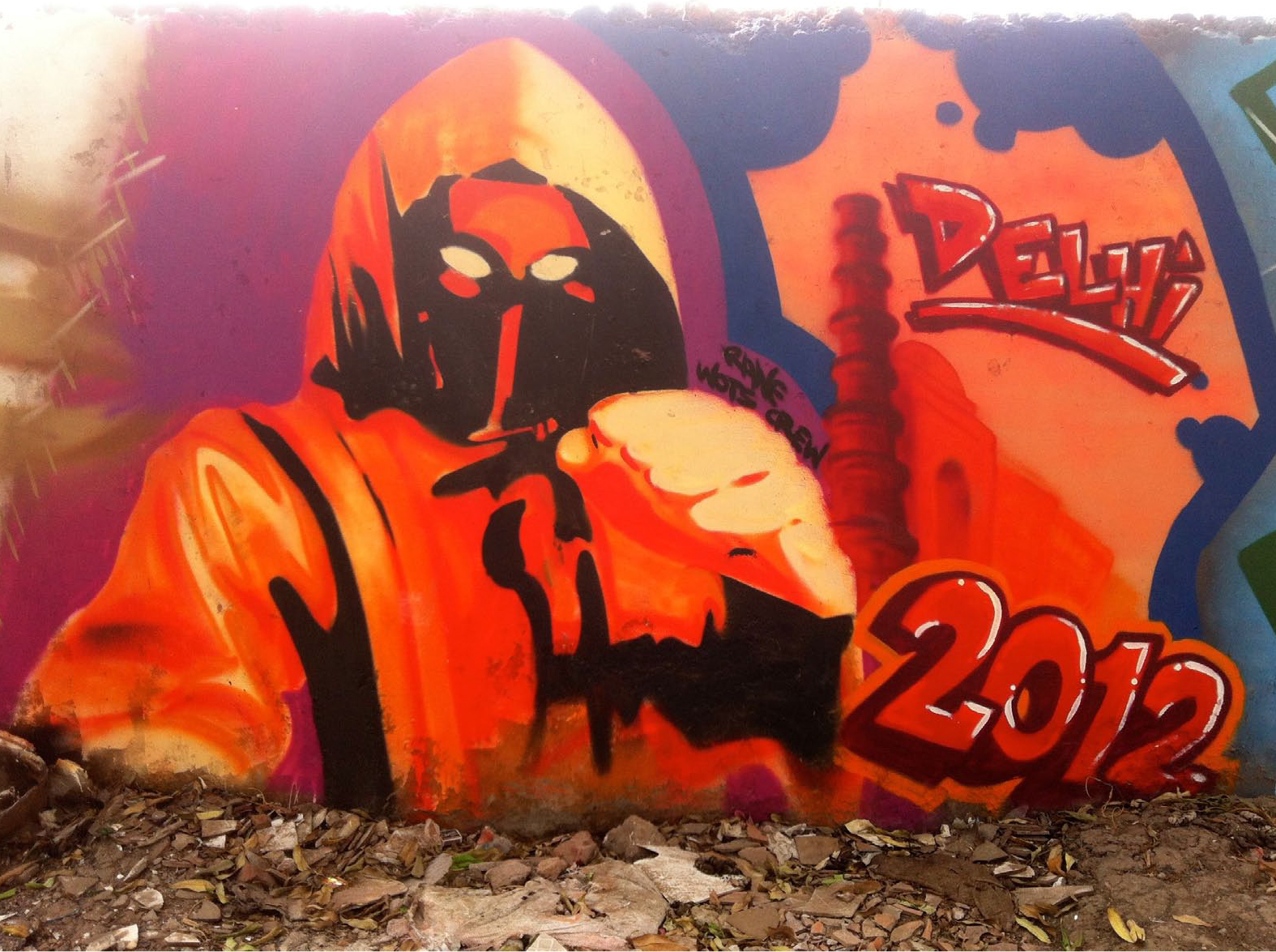 The first time I painted the 'RANE' character I made a sketch in a few min and it just felt right. Zebster from Germany and Haks from New York came through to my house and brought Dizy and Komet from Delhi. We painted a pretty long wall.

I returned to that same wall and painted further up

The wall was sort of semi-legal, so I had trouble with a couple of cops that wanted to beat me up for doing it with their kalashnikovs. I convinced them that I was plastering and fixing the wall and got away with it.

I painted alongside 'Zine' and 'Sam' at the side of a house. We asked a neighbour of mine and got permission to paint it. On one these days the temperatures peaked 46 degrees celsius while we were painting. 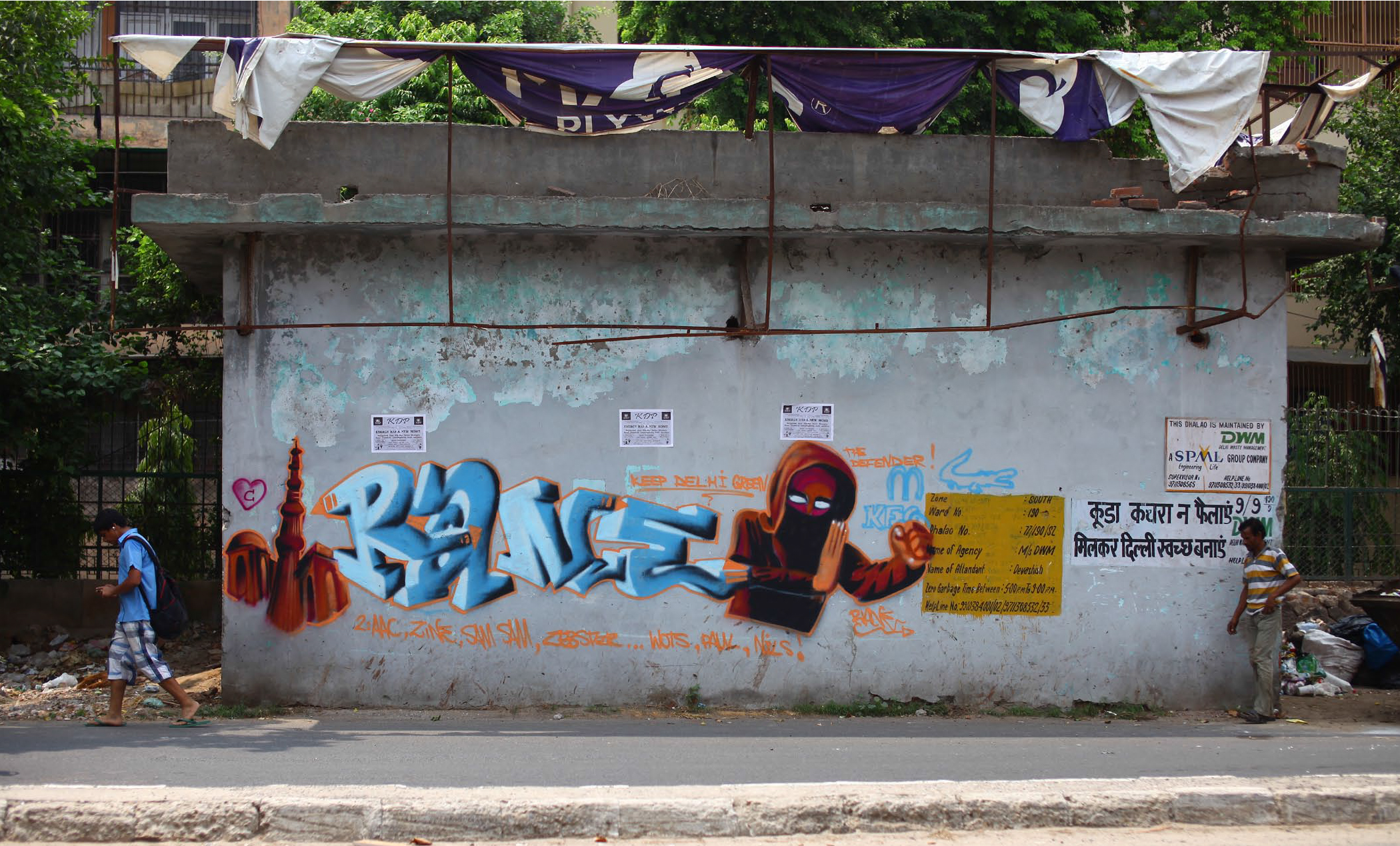 A Quick Session at Kalkaji

This was a lot of fun. The cops passed this spot every 10-15 min. Since they had no idea what a spay can really was, I just acted as if I was walking or on the phone when I saw the car approaching. They never paid attention to the wall.

A Session at Hauz Khas Village

Painting with 'Zine', we did this on an evening at hauz khas village and it actually stayed there for quite a bit. This wall is sort of the new delhi hot spot to paint now days. Specially for tourists. Nothing stays there for too long anymore.

At this session around 13 writers came together to paint. 'Daku' joined. After meeting the infamous 'Daku' years earlier, I finally got the chance to paint alongside both Daku and Zine in Ghaziabad. 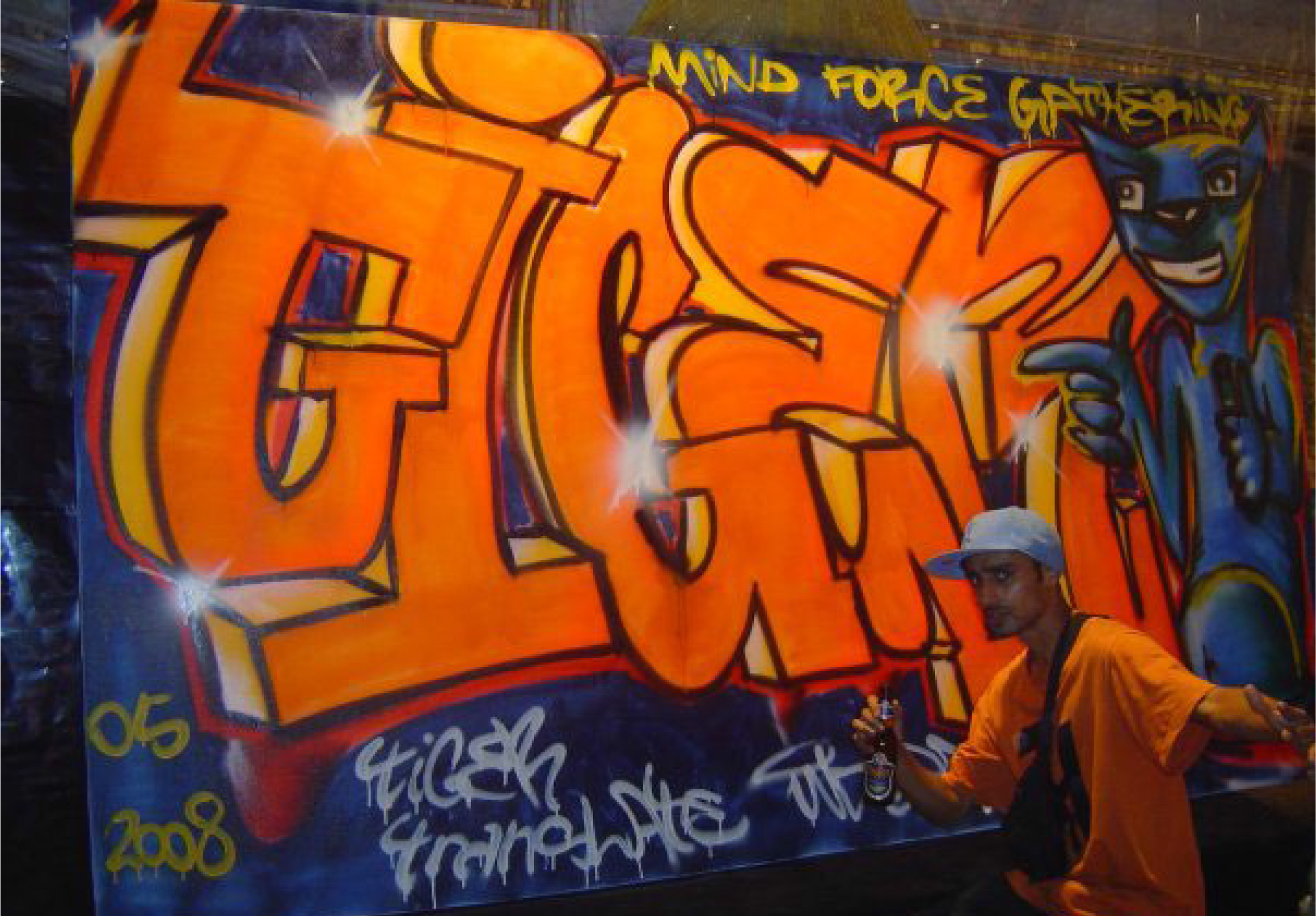 Habituated to doing walls in under 20 min, because police petrols are so frequent in Switzerland, I arrived at tiger translate and speed painted this canvas. I came in the evening about an hour late with piles of flyers for our next hip hop event. Some guys were doing stencils and had been there since the afternoon painting. Some were experimenting with spray paint for the first time in their life. It was truly an amazing experience and opportunity. After I finished this canvas relatively fast, it left me enough time to talk to news agencies covering the event and I gave interviews. I had the honour to share the front page of India today with one of the artists performing there at a separate later wall session in Bandra, Mumbai in 2008. Notice how watery these colours are? The spray paint was inferior to the ones normally used for graffiti. At that time there were no other brands available and the quality available at the time was really bad.

It felt like new york in the 80s and some of the graffiti really looked like that. Even the hip hop culture in general was in it's infancy. Breaking, beatboxing, emceeing...
I did a documentary that tells the story of a few slum kids in Mumbai from the biggest slums of Asia, who trained at the ruins of a fort in Bombay on top of a hill they called "battle fort":
https://d.tube/#!/v/yangyanje/7renac8h

Turntablism had a few really talented artists that just popped out of nowhere. Believe me, some real talent if it's one or two people out of 1.35 billion. This is something that I will soon cover in my blog. 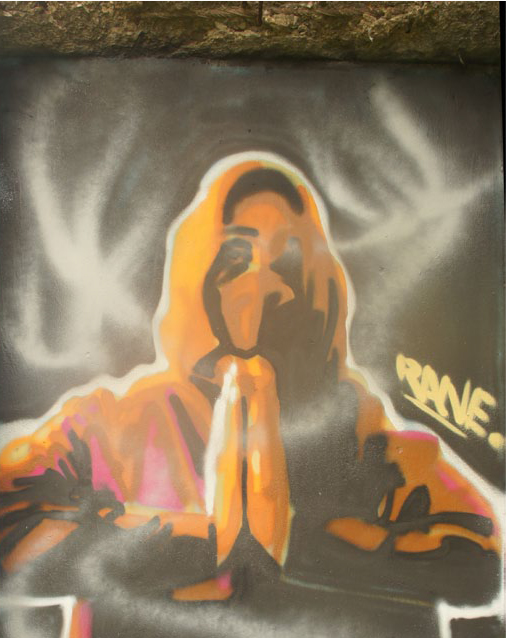 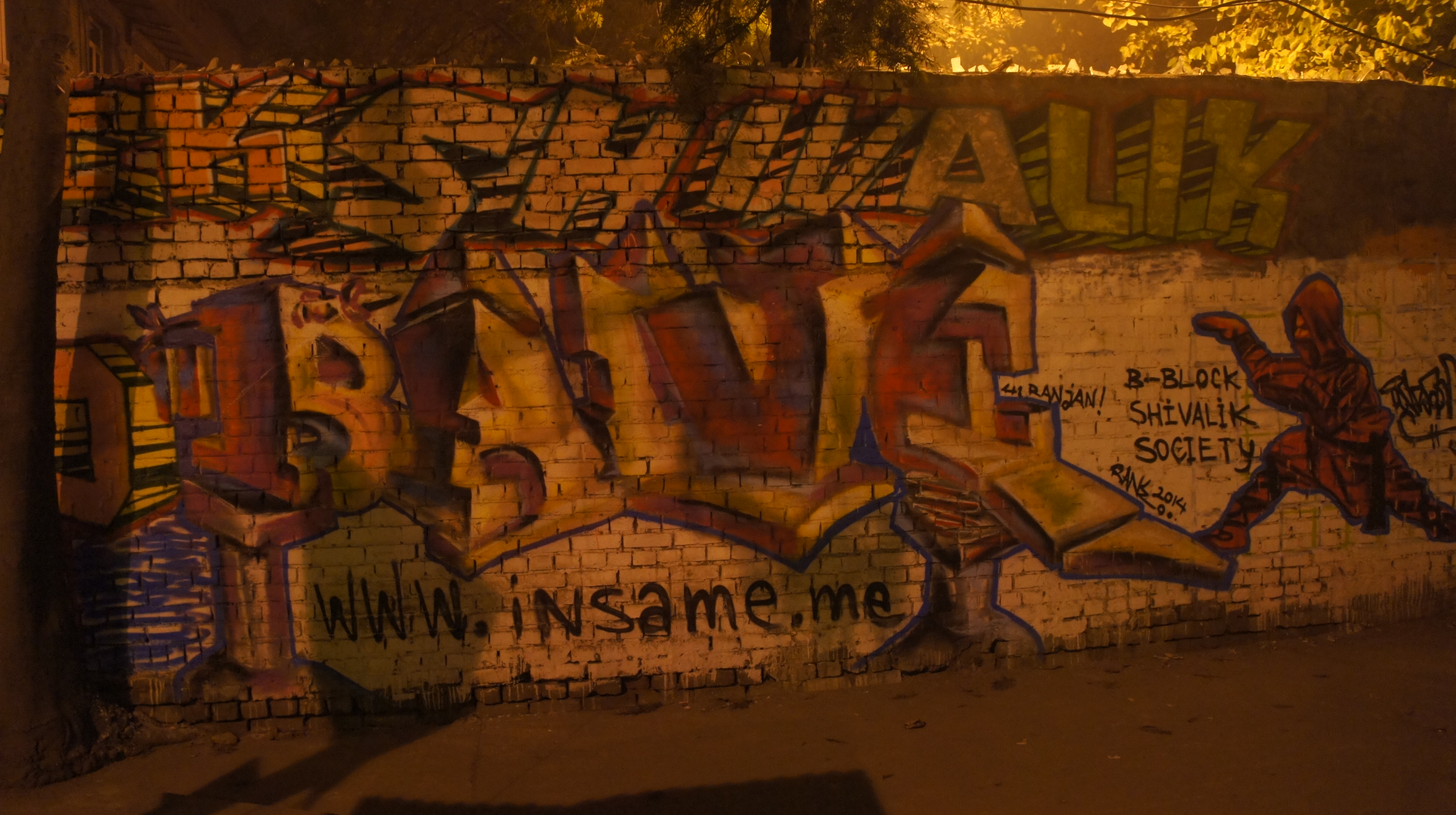 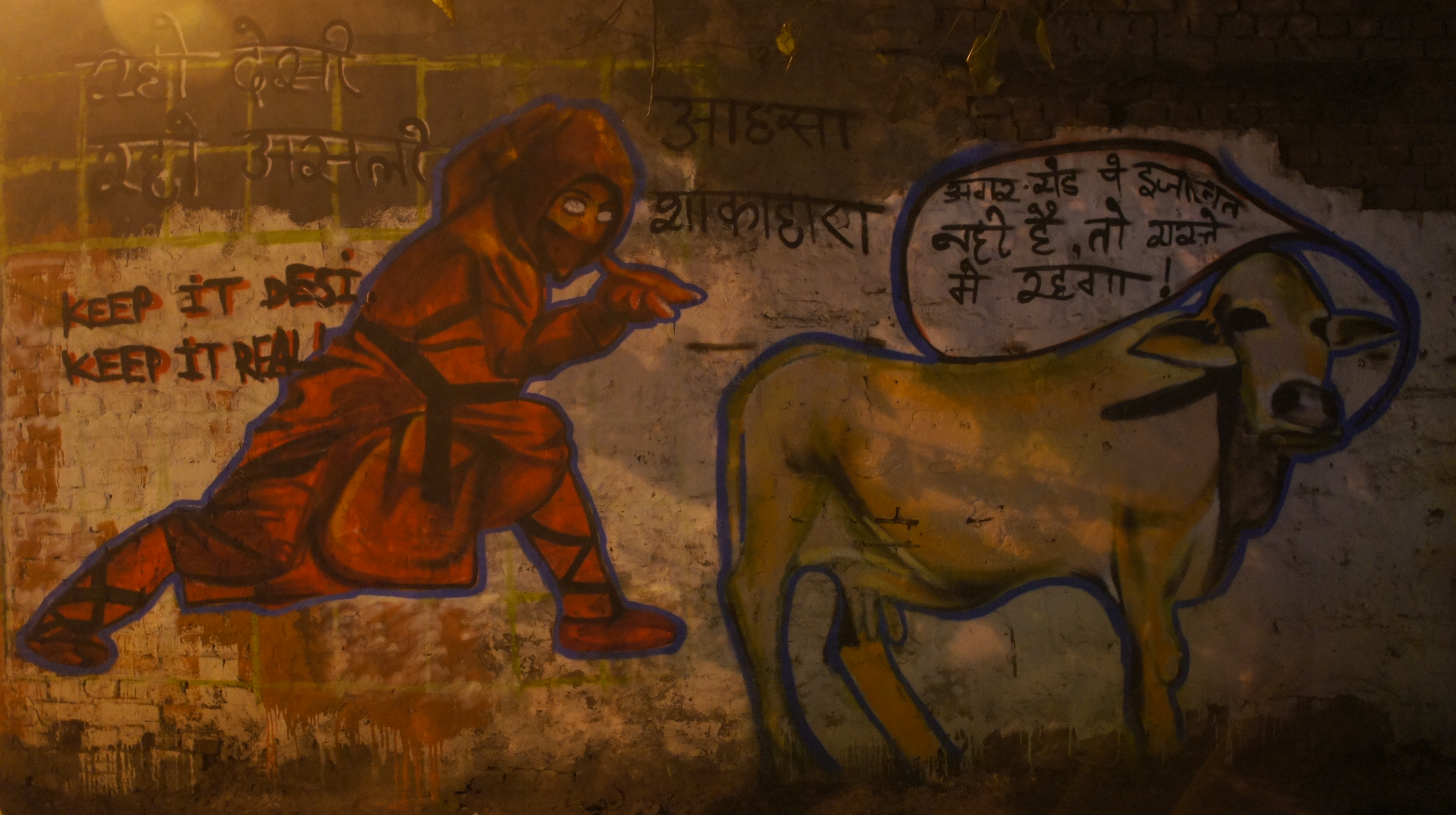 In 1999 I saw countless animals on the streets roaming freely. I got stuck with an elephant in traffic almost every Tuesday at the same red light on the way to my french class in south extension at alliance française de delhi. There were monkeys climbing on roofs and cows everywhere. Quite often a vegetable merchant would pass with his donkey and buggy. During the common wealth games there was some radical sanitation going on. I saw a lot of injured animals and most of the cows just vanished. So many monkey had an arm or a leg missing as if they were amputated. "The greatness of a nation can be judged by the way it's animals are treated"- Mahatma Gandhi. I decided to paint that cow with the speech bubble supposed to mean:

'If I can be on the road, then let me be in the streets!'